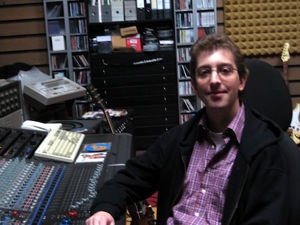 Born in Frankfurt/Germany, Tobias early in his life found to the pipe organ as his favourite instrument and has been working as an organist since the age of fourteen. Ever since his first venture into the world of composing music for media at High School he has continued to expand both his musical as well as technical abilities and is now working as a composer for films, video games and other media projects. He also serves as an orchestrator and arranger with a special focus on crossover projects.
He also provided tuition in composition, orchestration and arrangement and runs a consulting business assisting composers to build and maintain composing rigs and orchestral templates.


In 2006, he completed a two-year education for organ playing and conducting at the Institute of Church Music in the diocese of Mainz.
Tobias graduated from the University of Mainz with a M.A. degree in musicology and anglophone languages in 2012 and studied classical composition at the Peter Cornelius Conservatoire Mainz (Prof. Gerhard Fischer-Münster). In 2013, he earned his diploma in Media Composition and Cinematic Orchestration from ThinkSpace Education. Currently, he is working on his PhD thesis about Music in J.R.R. Tolkien's Legendarium. He plays organ, piano, violin, saxophone, Irish whistle and mandolin and is constantly adding to his collection of instruments.

Besides his work as a composer and musician, Tobias writes articles and tutorials about everything media-related for various publications and works as Head of QA and Support for OrchestralTools. He also from time to time codes applications in VB.net, including GUI applications for the educational sector.

If he happens not to compose music (which happens rarely), as an avid Western rider you can usually find him in the saddle of some lone Quarter Horse riding into the sunset.

Born in Frankfurt/Germany, Tobias from his studio works as a composer, orchestrator and arranger for media projects as well as an educator in the field of music technology, notation and music theory. Read more...